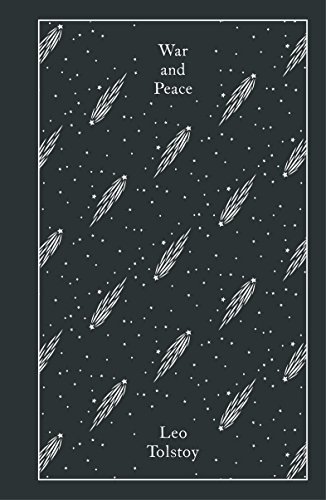 The average reader will spend 24 hours and 0 minutes reading this book at 250 WPM (words per minute).

A stunning clothbound Hardcover Classics edition of Tolstoy’s great novel, one of the undisputed masterpieces of world literature. Nominated as one of America’s best-loved novels by PBS’s The Great American Read

At a glittering society party in St. Petersburg in 1805, conversations are dominated by the prospect of war. Terror swiftly engulfs the country as Napoleon’s army marches on Russia, and the lives of three young people are changed forever. The stories of quixotic Pierre, cynical Andrey, and impetuous Natasha interweave with a huge cast, from aristocrats and peasants, to soldiers and Napoleon himself. In War and Peace, Tolstoy entwines grand themes—conflict and love, birth and death, free will and fate—with unforgettable scenes of nineteenth-century Russia, to create a magnificent epic of human life in all its imperfection and grandeur.

For more than seventy years, Penguin has been the leading publisher of classic literature in the English-speaking world. With more than 1,700 titles, Penguin Classics represents a global bookshelf of the best works throughout history and across genres and disciplines. Readers trust the series to provide authoritative texts enhanced by introductions and notes by distinguished scholars and contemporary authors, as well as up-to-date translations by award-winning translators.
View more on Amazon