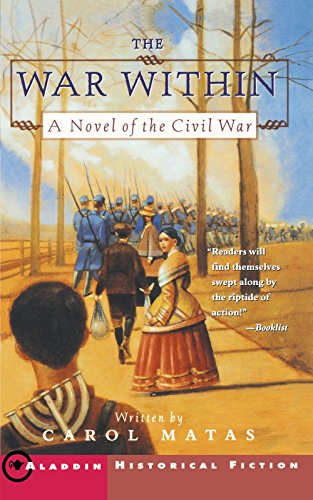 The War Within: A Novel of the Civil War

The average reader will spend 2 hours and 40 minutes reading this book at 250 WPM (words per minute).

Holly Springs, Mississippi, 1862
Hannah Green can't believe what happens to her family after the war breaks out. First, her sister Joanna falls in love with a Union soldier -- an enemy. Next, the same soldier tells Hannah and her family about General Grant's General Order #11, which commands all Jews to evacuate the territory for violating trade regulations. The Greens escape from Holly Springs just before their home is destroyed. They lose everything -- even their slaves, when Lincoln declares them free.
Now, because she is Jewish, Hannah cannot go home to Mississippi -- a Confederate state that's dear to her heart. Confusion sets in. Who is on her side, and whose side does she want to be on?
View more on Amazon

View The Boy on the Wooden Box: How the Impossible Became Possible . . . on Schindler's List on Reading Length