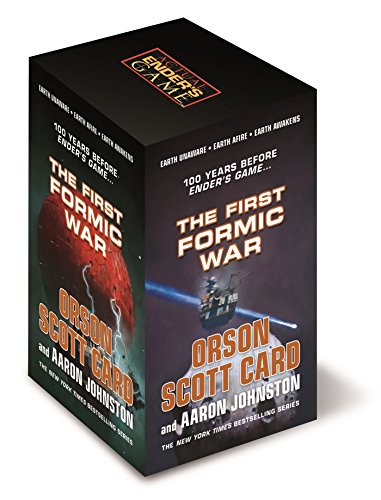 The average reader will spend 0 hours and 0 minutes reading this book at 250 WPM (words per minute).

Nearly 100 years before the events of Ender's Game... See how it all began. Earth Unaware, Earth Afire, and Earth Awakens: the blockbuster trilogy from New York Times bestselling authors Orson Scott Card and Aaron Johnston, now available together in paperback.

Humanity was slowly making their way out from Earth to the planets and asteroids of the Solar System, exploring and mining and founding colonies. The mining ship El Cavador is far out from Earth, in the deeps of the Kuiper Belt, beyond Pluto. Other mining ships, and the families that live on them, are few and far between this far out. So when El Cavador's telescopes pick up a fast-moving object coming in-system, it's hard to know what to make of it. It's massive and moving at a significant fraction of the speed of light.

But the ship has other problems. Their systems are old and failing. The family is getting too big. There are claim-jumping corporates bringing Asteroid Belt tactics to the Kuiper Belt. Worrying about a distant object that might or might not be an alien ship seems…not important.

They're wrong. It's the most important thing that has happened to the human race in a million years. This is humanity's first contact with an alien race. The First Formic War is about to begin.

View The Swarm: Volume One of The Second Formic War on Reading Length

View Ender in Exile (The Ender Quintet) on Reading Length