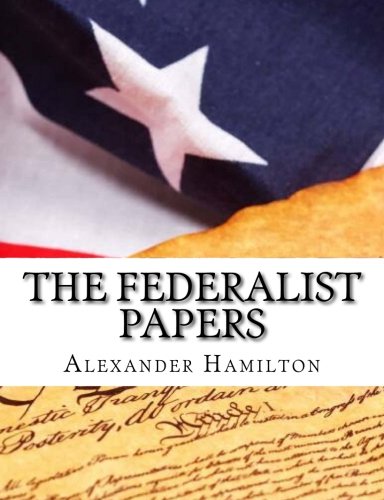 The average reader will spend 4 hours and 34 minutes reading this book at 250 WPM (words per minute).

The Federalist (later known as The Federalist Papers) is a collection of 85 articles and essays written by Alexander Hamilton, James Madison, and John Jay promoting the ratification of the United States Constitution. Seventy-seven were published serially in The Independent Journal and The New York Packet between October 1787 and August 1788. A compilation of these and eight others, called The Federalist; or, The New Constitution, was published in two volumes in 1788 by J. and A. McLean. The collection's original title was The Federalist; the title The Federalist Papers did not emerge until the 20th century. Though the authors of The Federalist Papers foremost wished to influence the vote in favor of ratifying the Constitution, in Federalist No. 1 they explicitly set that debate in broader political terms: It has been frequently remarked, that it seems to have been reserved to the people of this country, by their conduct and example, to decide the important question, whether societies of men are really capable or not, of establishing good government from reflection and choice, or whether they are forever destined to depend, for their political constitutions, on accident and force. There are many highlights among the essays of The Federalist. Federalist No. 10, in which Madison discusses the means of preventing rule by majority faction and advocates a large, commercial republic, is generally regarded as the most important of the 85 articles from a philosophical perspective; it is complemented by Federalist No. 14, in which Madison takes the measure of the United States, declares it appropriate for an extended republic, and concludes with a memorable defense of the constitutional and political creativity of the Federal Convention. In Federalist No. 84, Hamilton makes the case that there is no need to amend the Constitution by adding a Bill of Rights, insisting that the various provisions in the proposed Constitution protecting liberty amount to a "bill of rights". Federalist No. 78, also written by Hamilton, lays the groundwork for the doctrine of judicial review by federal courts of federal legislation or executive acts. Federalist No. 70 presents Hamilton's case for a one-man chief executive. In Federalist No. 39, Madison presents the clearest exposition of what has come to be called "Federalism". In Federalist No. 51, Madison distills arguments for checks and balances in an essay often quoted for its justification of government as "the greatest of all reflections on human nature."
View more on Amazon

View Economics in One Lesson: The Shortest and Surest Way to Understand Basic Economics on Reading Length

View The Quest for Cosmic Justice on Reading Length

View Common Sense, The Rights of Man and Other Essential Writings of Thomas Paine (Signet Classics) on Reading Length